THE PUSH FOR EQUAL PAY IN PRO SURFING

The English Surfing Federation recently joined the WSL in the effort to offer equal pay for male and female competitors.

By Andrew Lewis
via  Surfline.com

At a meeting late last month, in the UK surf town of Newquay, the English Surfing Federation agreed to offer gender-equal purses in the Open Men and Women events at the 2016 English National Championships. “We just want to give the ladies a fair opportunity,” said ESF chairman Andy Sturt.

“They’ll be surfing in the same conditions, on the same day, with the same amount of time, under the same rules, and paying the same entry fee. Isn’t it right and proper that we reward [the women] with the same amount of money as the gents?”
The ESF’s decision to provide equal pay had been a long time in the making. Some on the ESF’s executive committee, particularly its female members, have broached the idea for the last couple of years. But due to the federation’s association with the United Kingdom Pro Surf Tour, which has strict criteria for prize purses at each event, the ESF has been beholden to the Tour’s rules. In 2016, however, the ESF will be running the National Championships at Cornwall’s Watergate Bay, independently of the UK Pro Surf Tour, and are therefore free to choose their own prize purses. In the past, the Open Men’s winner received £1,000 (about US $1,500) and the Open Women’s winner £250 (about US $370). “That was a massive disparity,” Sturt said.

To be clear, there is a difference between parity and individual equal prize purses, such as those at the upcoming English National Championships. 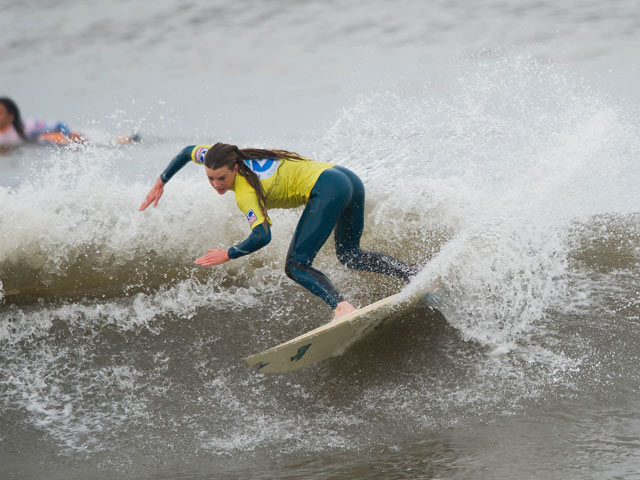 UK pro Lucy Campbell — stoked to be getting equal pay for equal showing. Photo: Ian Forsyth/Getty Images
The issue of pay disparity in global sport has been escalating in recent years, and professional surfing, believe it or not, has been at the forefront of this trend. At the start of the 2014 WSL season, the first year under full ZoSea control, the revamped organization announced that prizemoney parity would be a key initiative moving forward. Indeed, in 2014, professional surfing became the first international sport to institute complete prizemoney parity at the elite level.

To be clear, there is a difference between parity and individual equal prize purses, such as those at the upcoming English National Championships.

For example, at the Target Maui Pro, Carissa Moore received $60,000 for the win; at the Billabong Pipe Masters, Adriano de Souza got $100,000. The discrepancy comes from the fact that, at the elite level, there are twice as many competitors on the Men’s Tour. In 2015, Men’s individual event total prize purses were $525,000, divided between 36 surfers, while Women’s event total prize purses were $262,500, divided between 18 surfers. Thus, averaged out, total prizemoney is $14,583.33 per surfer, male and female. (Dave Prodan, the WSL’s VP of Communications, revealed to Surfline that prizemoney “will probably go up this season.”)

So, while there remains a literal difference in winnings, technically there is parity, and this a momentous step forward for the Women’s Tour, which in 2013 had total purses of $120,000 against the Men’s $425,000.

Such parity is unprecedented in professional sports as a whole. Take, for example, the Women’s World Cup this summer. The champions, Team USA, took home $2 million. In Brazil last year, the winners of the Men’s World Cup, Germany, pocketed $35 million. In pro golf’s US Women’s Open, the total prize purse was $4.5 million, less than half of the Men’s US Open. Pro tennis, however, has taken steps toward parity: at Wimbledon last year, both male and female champions took home $2.9 million each.

Of course, the fate of equal prize purses is unilaterally contingent upon the real numbers: advertising dollars. For example, at Wimbledon this past summer, the Novak Djokovic/Roger Federer final drew 2.7 million ESPN viewers, and the Serena Williams/Garbiñe Muguruza final drew 2.4 million — a relatively equal viewership that is the key to advertisers dropping gender bias.

The eyeballs clause, as it were, has not been lost on the WSL, and in particular, Jessi Miley-Dyer, the Women’s Tour commissioner. Miley-Dyer has overseen the return to the Women’s elite-level venues, like Fiji and Honolua Bay, in which the events run independently from the Men’s, rather than concurrently as in the past (a largely cost-saving venture that often leads to the women competing in inferior surf… never good for ratings, male or female). Any surfer who tuned into the Target Maui Pro in December enjoyed the benefit of Miley-Dyer’s retooled Tour — the ladies threading perfect Honolua was a hard show to tune out, which must have satisfied the ravenous wolves in the ZoSea lair. (This writer requested viewership numbers from Prodan, to which he replied, “the WSL doesn’t release traffic data.”)

While the English National Championships are never going to garner the viewership or prizemoney that the WSL Championship Tours will, its decision to pay its Open Men and Women winners equally is another notch in pro surfing’s belt as a leader in the gender disparity debate across global sport.

“It’s not that we want to be trailblazers,” Sturt finished. “We just feel that this year it’s time to change tack.”